One … or Three, For the Team – Visiting St. Maarten Post-Hurricanes

Home » Beach Bars » One … or Three, For the Team – Visiting St. Maarten Post-Hurricanes

Beach Bar Bums contributor Jim Greer recently visited St. Martin/Maarten and beyond his search for an “authentic local owned beach bar,” he offers us insight on the island post-hurricanes in his latest article. While damage to the island from the hurricanes was still evident, the spirit of the locals remained unbowed in this Caribbean paradise.

We docked aft first in St. Maarten, a cozy working harbor servicing four container ships, and the mega-cruiser upon which we’d arrived. We left the boat in an unhurried, leisurely, almost pedestrian fashion and headed for the taxi stand. We encountered a smiling, if somewhat harried woman, and made the operative inquiry:

“That’s a great question,” she replied. She put us onto a van headed downtown.

My initial assumption was that it would be just another cruise ship-created enclave of duty-free diamond stores, t-shirt shops and overpriced beer slingers. Turned loose, ($6, plus tip) we took off toward what appeared to be town. It delayed the lighting of the drinking lamp. It was a meaningful decision.

Behind the scenes a quarter mile from shore, the damage done to the island was still evident. Buildings had yet to be repaired, and re-inhabited. There were Gerry-rigged roof patches and piles of debris. There were operable cars without window glass. This place had gotten a butt whipping.

The people were invariably friendly. They returned smile with smile, wave with wave and friendly hello with a big welcome. We were not exactly familiar with street-crossing protocol, but quickly discovered that even the hint of wanting to reach the other side caused drivers to stop and wave us ahead. Several times I think we violated unwritten rules. No one seemed the least bit miffed.

We found our way to the beach, in the process passing several structures stripped nearly to the foundation. We found a tiny establishment at the far end of the line – The Oranje Café – whose shutters still bore the battle scars of last Fall. The wooden building itself was about the size of a small bedroom, with five tables on a porch, and about eight stools at the bar. The sand drew up almost to the front steps, the view of the harbor breathtaking. The bartender was a tiny, attractive woman with long brown hair hinted dirty blonde. Seated nearby a tall, handsome man with dark skin and an omnipresent smart phone welcomed us. We ordered beers – Caribs – and settled down to chat with them. 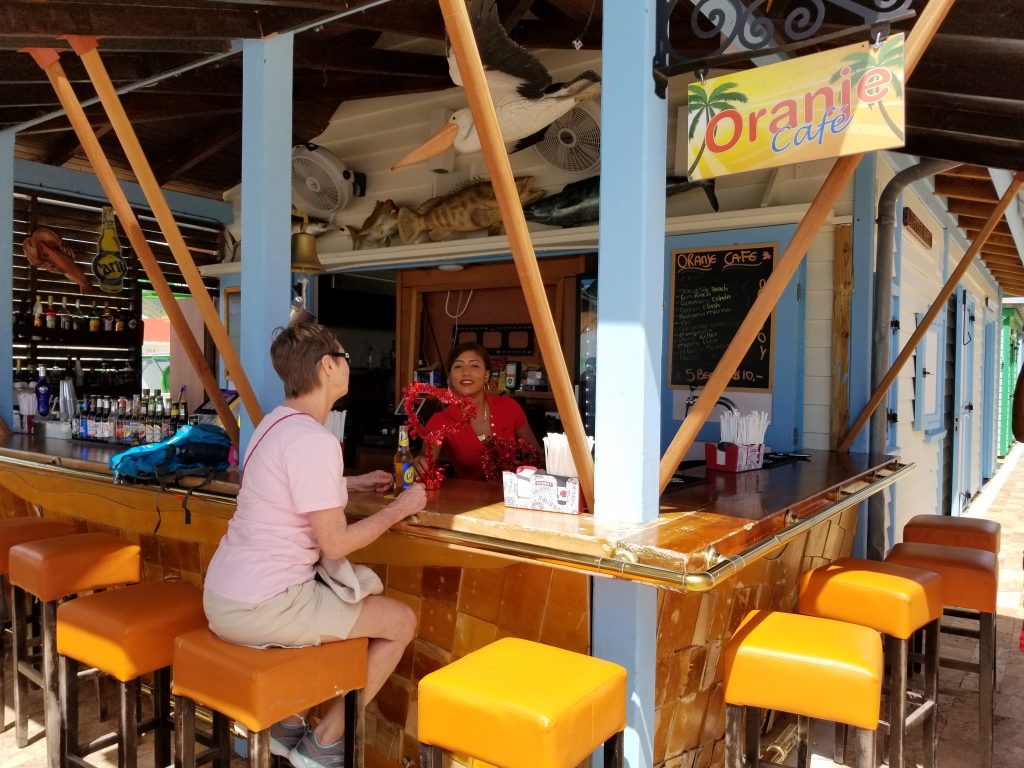 They’d fought their way back to business after the hurricanes, they said. The man brought up a video of the frightening storm, shot from ground zero. He had lived other places, but this was home and he was determined to keep the business going. By and by they broke out red heart table pieces and dispensed pink Valentine’s Day shots that carried a substantial “I love you” punch.

Locals and tourists flowed through as we chatted and drained our beers. One man, a hearty, back-slapping fellow who greeted the workers as friends, had returned from Europe, where Winter had been cold. He was happy to be back on St. Maarten, tucking into a delicious-looking chicken salad served from the small kitchen in the back of the neatly-trimmed shed.

We finished our beers and headed to the middle of “downtown.” It was eclectic – fancy high-end jewelry shops, small hand-made craft pavilions and beach bars. Some were makeshift – small stands set up in the shade in front of smashed buildings undergoing reconstruction. Others were elaborate, substantial. A man strode up to us and announced that The Honky Tonk had the best… Frankly, I don’t remember what it had the best of. We popped in, seated along the boardwalk in the shadow of the modest green structure, just yards from the sand and beach chairs. 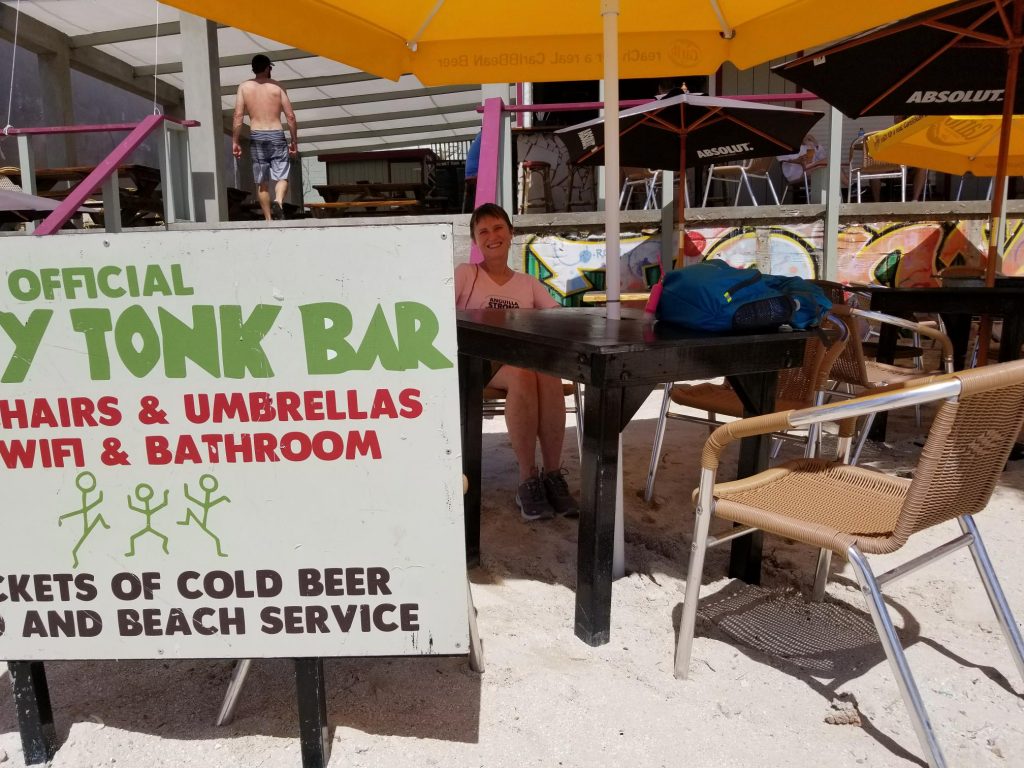 My Painkiller performed as advertised. Creamy rich, plenty of rum and the best hint of pineapple. Her Carib was as icy cold, silky smooth and crisp as the others up the beach. I ordered rib bits, she a margarita pizza – tomato, cheese and a lot of black olives. The ribs were tender and juicy, the rub flavorful and complex, an excellent island version of the venerable baby back. The pizza was enough for three, soft yet crunchy crust with a perfect helping of topping. Our server chatted for a few minutes – things were looking up. We were welcome to come back and stay longer. The bill – a modest amount, which we supplemented with an island-style tip.

We found ourselves in Jewelry Avenue as we walked off lunch – it was Valentine’s Day after all. Without much bargaining we discovered a ring we couldn’t pass up. I mentioned that I was a writer, a blogger. The salesman, who had lost his business in the hurricanes but had found work with a friend, said his daughter is also a writer. “Tell people to come visit us,” he said, referring both to the little shop, and the lovely island in paradise. “They are welcome.”

On the water taxi back to the ship, the crew played a recording of Sweet Caroline, prompting several hundred people to join in song. As diverse a group as one might imagine, a cross section of races and nationalities loudly remaking something probably written before most were born.