“Over Crab,” A Short Story by James Greer

Home » Things That Don't Suck » “Over Crab,” A Short Story by James Greer

James “Jim” Greer, one of our most popular contributors to the blog, sent me this short story he had written almost a decade ago. At first, I wasn’t sure how to tie it into the overall theme of the blog. One day, it finally hit me.

Most of us have had moments like the one described in Jim’s story and some of us have probably experienced them at a beach bar. The lilting sounds of the waves against the shore, palm trees gently swaying in the wind and one or two rum drinks can create an atmosphere where we are reminded of just how good we have it, especially if we find ourselves enjoying the moment with a loved one.

That’s where this story can apply to everyone who reads this blog. While it takes place at Denver’s closest thing to a beach bar, most of us can relate … and a gentle reminder via Jim’s prose of what is most important is never a bad thing.

From the author: “This short story won honorable mention in a contest in Writer’s Digest in 2010. The actual evening that inspired it was a night out for my wife and I at Max’s Gill and Grill, a Denver restaurant that is the closest to a beach bar that we have here in Denver. We’ve been there often.” 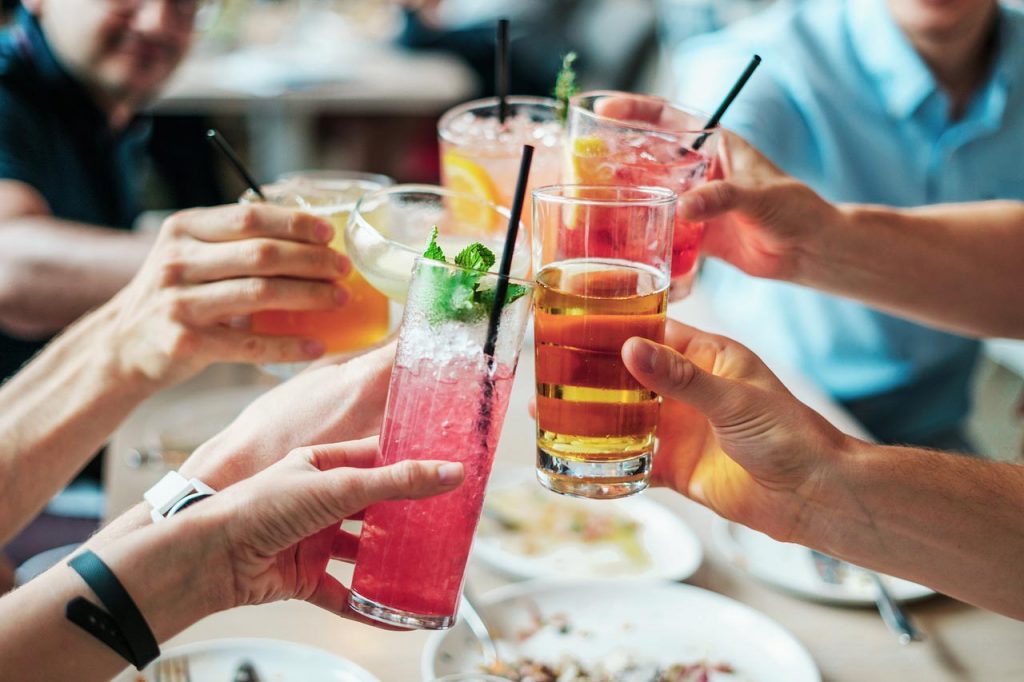 Alone in a room full of laughing, talking, joyful people, Amy Painter sat in the wood-benched booth and glanced at the menu. Across the table, her husband Ken fussed over his Blackberry. He had the little pointer thing out, tapping at the letters on the keyboard. The grating beep of each keystroke drowned out the canned music in the background, however that was possible.

“What are you going to order?” she asked.
“Huh? I’m sorry, sweetheart,” Ken replied, never taking his eyes off of the device. Not that it would let him.
“It’s restaurant week, honey. They have a special menu.”
“That’s nice.” A variety of expressions roamed his handsome face, from dismay to irritation to that awful assertiveness he acquired about all things rocketry. For Dr. Kenneth Painter, Vice President of Propulsion at BoosterDyne Corporation, each of the e-mails he read was…
Mostly, it was life and death, at least for the company.
“Ken, are you listening?”
“Huh…sure, right. Um…chardonnay.”

Until his on-line conversation had finished, a disjointed jumble of blurted non-sequiturs was all he would offer her. He’d never learned to multi-task, not the way eleven years of police work had taught her to. If she didn’t love him—

“Oh, for the love of…” Ken mumbled. “It’s going to be a connector. Check the connectors.”
“I don’t see connectors on the menu.” If cattiness didn’t work, didn’t get his mind out of the little box he was playing with, only manipulation would be left.
“What?”
“It’s 5280 week, Ken. Special menu. You know… Mile High City? We live in Denver? Remember, we moved from San Diego to Denver when we graduated and got married?”
“Just… Order for us, can you, sweetheart? I’m having to think for the guys running the test sequence.”

“Welcome to The Tidewater,” the waiter said, seeming to appear out of nowhere. Tall and slender, wearing a black shirt open at the collar and a clean white apron, he spoke softy, but with a smile in his voice. “Can I get you some drinks?”
“Can we have two glasses of chardonnay, please?” she asked. “House will be fine.”
“Perfect. Do you know what you want?”
“Um… It all looks so good…”
“I see you looking at the 5280 menu, but I just want to mention that this is Crab Tuesday, as well. Nine dollars per pound for Snow Crab, eleven for King.”
“Well, I thought I knew what I wanted. But, I love crab.”
“Take your time, I’ll get your drinks.”

“They have crab on special, honey,” she said, putting her chin nearly on the table, to catch his eye. Long tresses of jet-black hair lay in front of her. She bundled them up behind her head with a clip from her shoulder bag. What would her mom have said, for a proper Vietnamese woman to allow her locks to cascade onto an eating surface?
“That’s nice. You decide.”
“What is going on? Can’t they let go of your leash for five minutes?”
“It’s an engine bell gimbel test. For some reason, one of the actuators is acting up.”
“Aren’t a bunch of the crew PhDs? Like, they can’t totally figure it out on their own?”
“Apparently not.” Ken’s mocha-brown eyes reflected the glow of the screen, and shifted spastically to soak in the words. Once in a while, he closed them and made an ugg sound that was so…curt, so dismissive, so impatient.
“Okay, I’m going to order crab.”
“Fine. Fine.”

He probably would have said the same thing if she’d told him she was ordering bowls of turpentine. The explanation he’d once offered – rockets weren’t more important than her, just more compelling – was the entire hurtful truth. If his team at the Cape was bugging him, the issue had to be significant. While he stared intently at the tiny computer screen and tried to solve a problem occurring two thousand miles away, she got to wish he did something less intense for a living. 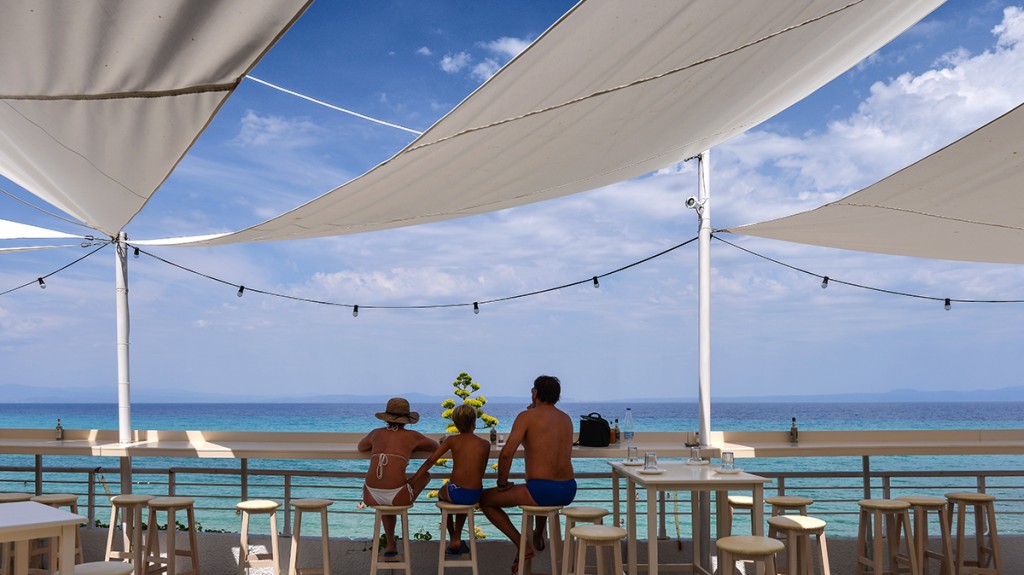 Around them, the room hummed with soft music and café conversations. An attractive young woman at the bar was being pawed by an older guy with a hopeful, inviting grin. By her body language, the woman was unreceptive and wished he’d fall into a hole. Next to her, a yuppie couple giggled at each other, heads close. His business suit was still crisp at the end of the day, and she? Jeans, a really nice bright-white blouse and an argyle button-up vest. Heels, with pointy toes – ruby red. Nice look, like she had been able to get home before they went out. Or it was her day off. Cop? Nah, her back was to the door. Maybe a doctor.

“Ma’am, are you two ready to order?” the waiter asked. He stood with his hands behind his back, a muted look of amusement stirring in the corners of his mouth as his eyes shifted from her to Ken and back.
“Um… We’ll share a double order of the Carib calamari, and a pound each of snow crab.”
“Perfect.” He turned on his heel and walked away.
“Is that okay?” she asked, already knowing the answer.
“So far, so good,” Ken replied. “It was maybe a connecter issue. They’re running the test again.”

Well, that was something. Either he’d find out in five minutes that life as they knew it had ceased to be meaningful, or for three hours he would get a parade of e-mails from his friend Terry about the stupid machine. Either way—

“Here you go,” the waiter said, a huge serving dish in his hand. “I put it all on one plate.”

Four silver cups dotted the corners of the square, bone-white platter. Heaped in the middle was an assortment of circles, and what appeared to be skinny fingers, all batter-dipped and lightly-fried. She squeezed a couple of the lemon wedges over the pile.
Ken barely noticed.

“Honey?” she cooed.
“Um… Calamari?”
“Uh huh.” She dipped one of the rings into the sauce and lofted it toward him. When she passed it in front of his eyes, it made his nose twitch. When he looked up she offered it to him.
“Oh, that’s awesome,” Ken said, taking it into his mouth. “Wow.” He set down the pointer and reached for his wine. Then, with a sideways glance at the tiny screen he took a piece of the squid and held it out for her.
“Do you remember the first time we had calamari?” she said.
“Yeah, that little bar in Mission Beach,” Ken replied, feeding the bit of food to her. His slender face sprung alive as she nibbled at his fingertip. He might have even been suppressing a smile. “San Diego. It was my last ten bucks and I think we split a beer and appetizer. You were a junior?”
“Senior, and you were in grad school. You’d driven down from Pasadena for the weekend, in that old, rickety Datsun. It had a sewing machine motor for an engine, didn’t it?”
“Right. Right. We went to that little place on the beach.”
“Uh huh.”

The conversation about the little bar and their empty wallets and the lovemaking that almost couldn’t wait until they got to her apartment consumed the ten minutes the calamari lasted. Before long, a plate of snow crab was set in front of each of them.

“Oh, I love the smell of fresh crab,” Ken effused. “It brings me back to… It was Fisherman’s Wharf.”
“You’d done your first big launch, and we celebrated with a trip to San Francisco.”
“I was so stoked. It meant financial security for us. It meant that all of the hard work, the years in the classroom, and the lab, and the study weekends, the trips to the Cape… Being away from you. It was all worth it.”
“I think it took us two hours to finish our dinner.”
“I remember eating as sort of a process. I remember your eyes, your smile, your long, shiny hair. I remember thinking that I was married to the most beautiful, most captivating woman in the world. And I remember the smell of the sea.”
“And the garlic.”
“Oh, my God. The food was awesome.”
“And then… Nine months later, Ethan was born.”
“You asked me, over Dungeness crab, if we could start our family.”
“You cried.”
“Out of happiness. Nothing said you believed in me like wanting children. Wanting me to be the father of your children.”
“There is something enchanting about sitting down and cracking crab together.”
“You’re still the most beautiful woman in the world. Every time I smell seafood, it reminds me of the times we’ve… I dunno, shared these kinds of moments together. I wish they could last forever.”

The blush came over her as quickly as a stoplight, without the yellow as a warning. Under the table, he gently held one of her knees between his.

“Remember the ad campaign on Food Network?” Ken asked as he turned off his Blackberry and slipped it into his pocket. His eyes were bright and rich, shining with marvel and wonder and the enthusiasm of fresh discovery. His face lit up, his smile manly confident but also boyishly bashful. “You know – come taste life? I think this is what they meant.”

Inside, her heart skipped a beat at the bond she felt with this bright, sensuous man. With plastic bib and messy fingers, he was once again carefree Ken Painter. It wasn’t really a wife being manipulative – ordering the crab. Ordering something that reminded them of the love that had been – and would always be – theirs. It was just her gift to him.

“I’ll bet this is totally what they meant,” she said, eyes locked onto his.