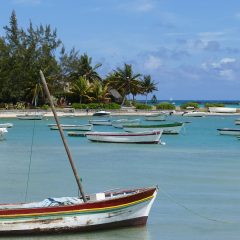 If you didn’t know better, you’d think this image of a beach was taken in the Caribbean. You’d be wrong. Cap Malhereux, a small village located on the northern tip of Mauritius, would be the correct answer. Do an image search for Cap Malhereux and you’ll find other equally splendid pictures of the village, especially its red roofed church. It’s an ideal scene with fishing boats at rest in the water, itself encircled by white sand and... 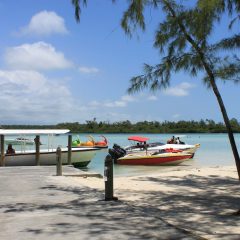 Mauritius, an island nation located about 550 miles due east of Madagascar in the Indian Ocean, isn’t featured on the blog often. Not known for its beach bars, the island is well known for its pristine beaches. One of those beaches made it into this week’s article. Unidentified by the photographer who posted the image, the scene is representative of many found across the Caribbean. With boats beached in the sand or tethered to the... 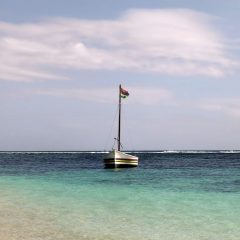 I don’t feature the beaches of Mauritius much on this blog so when the below pic of a boat off its shore was the most liked image from my daily “Beach pic of the day” posts, I was a little surprised. Not in a bad way, mind you. I thought it might have some appeal. The “boats on the water” images I’ve been sharing more frequently lately have resonated with my readers. The fact that the picture is similar to the cover photo of Kenny...