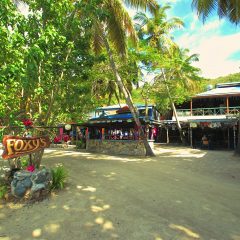 In what will come as no surprise to any of the almost 300 residents of Jost Van Dyke and the countless others who have strolled ashore to his beach bar on Great Harbour, Foxy Callwood, the proprietor and do-everything at Foxy’s Tamarind Bar, is charming. At least that’s how Jake Lamb described him in his article for Yachting Magazine. Foxy’s beach bar and the rest of Jost Van Dyke get an in-depth review as well, as Mr. Lamb not only... 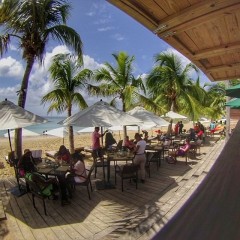 This week’s look in at beach bars via Instagram features three of our favorite bloggers at beach bars on opposite sides of the Caribbean with a peek at a beach bar and resort made from driftwood in Florida. I’m mean the stuff’s just laying around the beach. You might as well put it to good use and build a beach bar, right? Erin de Santiago, from Our Tasty Travels, shares an image of the Palapa Bar and Grill on Ambergris Caye in... 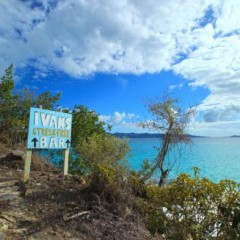 Ivan’s Stress Free Bar, a beach bar on White Bay in Jost Van Dyke in the British Virgin Islands, nails it when it comes to beach bar nomenclature. After all, if a beach bar can’t be stress free, what’s the point? Known for its laid back vibe, shell covered walls and honor bar (hop behind the bar, mix your own drinks and leave an appropriate donation behind), Ivan Chinnery’s beach bar needs no superfluous hyperbole from me. If it’s... 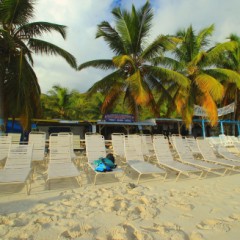 Gertrude’s Beach Bar and Boutique on Jost Van Dyke in the British Virgin Islands doesn’t get the attention some of her better known JVD brethren get, such as Ivan’s, Foxy’s and the Soggy Dollar, but make no mistake, the grand dame of Jost Van Dyke has assumed her rightful spot as “queen of the beach bars” (along with Jewel, of course) on this British isle and can stand sandy toe to sandy toe with any of her better known brothers. The...

Part of the magic and allure of beach bars is the music. Many times, that music is simply the constant drone of a dozen different conversations all occurring at the same time. Sometimes, once the conversations have ended for the night, nature’s symphony comes forth and the gently lapping waves, chirping birds and rustling palms take center stage. Occasionally, as recounted by one of the fans of my Facebook page, it is an impromptu jam...