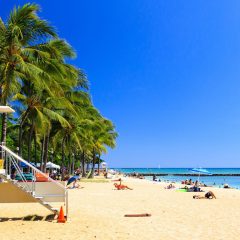 When last Thursday rolled around and I posted the beach pic from Aruba, I was convinced it was going to be the most popular “beach pic of the day” for the week. Those Hawaiian shores, however, are a touch foe to beat and at the end of the week, it was this image of a beach in Honolulu that was the most liked picture. It’s one of my favorite beach pics we’ve featured on the blog. The composition is perfect and with the palm trees...

Beach Thursday Pic of the Week – A Hawaii Sunset

This week’s most popular beach image on our Facebook page comes straight to you from our last state, Hawaii. Certainly not last in the hearts of travelers the world over, Hawaii is a tropical escape with all the amenities of the modern world. Sometimes the modern world can get a little overbearing, even in Hawaii, and it’s scenes like this one that remind visitors of why they chose Hawaii as a destination in the first place. To... 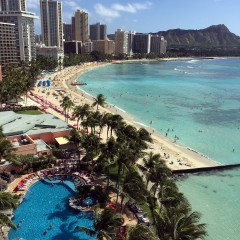 Ask someone to name a beach in Hawaii and chances are Waikiki will be among the most common responses. Situated in the southeast corner of the island of Oahu and sandwiched between downtown Honolulu and Diamond Head State Monument, it’s among the most photographed beaches in the state. Featuring such landmarks as the Duke Kahanamoku statue, the Moana Surfrider and the Royal Hawaiian, it’s also home to a few beach bars who have managed... 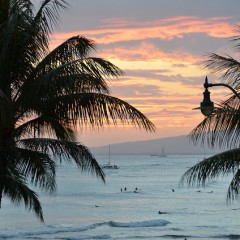 Every once in a while, when news is slow on the beach bar front or I need an image for an article, I’ll head on over to Flickr and browse through their Creative Commons pics. Creative Commons is a license that photographers can use that allows their work to be distributed freely, as long as the required attribution and license requirements are met. In some cases, you can do pretty much whatever you want to the photo, as long as... 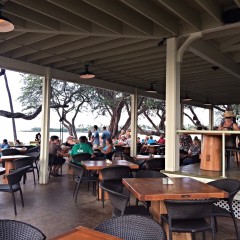 Known more for its tiki bars, the islands of Hawaii don’t get as much attention for their beach bars as they should. CNN Travel, in an article posted today, does its best to rectify the problem highlighting what it considers the state’s ten best beach bars. Ranging from the kitschy Lava Lava Beach Club on the Big Island, which it describes as “tiki torches, swaying palms, hula dancing and a live band” to the...