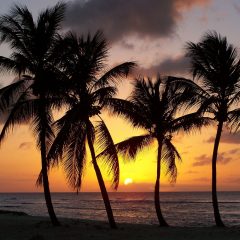 Those Caribbean sunsets steal our hearts every time and this week was no different. Out of all the images posted in my daily “Beach Pic of the Day” posts on the Facebook page, it was the following image of a sunset from Anse Bertrand in Guadeloupe that garnered the most reactions. As the magic of the holiday season envelops many of us this time of year, it’s the magic of an island sunset that functions as a daily reminder of just how... 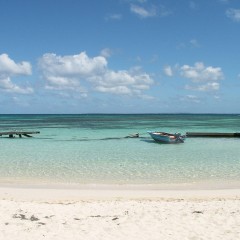 Referring to ‘Ti Robinson, a beach bar located on Ilet du Gosier, a small island just off the coast of Guadeloupe, as “the best Caribbean beach bar you’ve never heard of,” Carib Journal’s Alexander Britell shines the well-deserved spotlight on an area not typically covered in Caribbean travel blogs. While this nation isn’t as well known for its beach bars as other destinations in the region, it appears to have a treasure in ‘Ti... 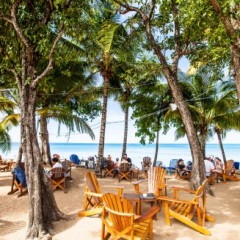 Kawann Beach Bar is located at the Langley Resort Fort Royal in Deshaies, Guadeloupe.  While Guadeloupe isn’t well known for its beach bars, it shouldn’t be overlooked as the Kawann Beach Bar admirably represents everything you would expect from the best beach bars in the Caribbean. Photos used with permission from the Langley Resort Fort Royal. All links below redirect to information regarding the resort. Get Social...

Most recipes for the Old Fashioned cocktail contain bourbon or whiskey but when you run a beach bar blog and have been on a rum kick for a month, it seems more fitting to substitute some Damoiseau V.S.O.P. Rhum Vieux Agricole, add “Cre” to the name (those marketing folks at Damoiseau are clever) to hearken back to your French/Creole influence and get on with your drinking. The Cre Old Fashioned is a simple drink to make which is one...

I’m a big fan of champagne, especially when I can drink it. The Air Mail cocktail, featuring Damoiseau V.S.O.P. Rhum Vieux Agricole, manages to integrate an ounce of Brut champagne into its recipe. Since the drink is topped with the chilled champagne, don’t be late for this flight – it may take off early. Air Mail Recipe 2 oz. Damoiseau V.S.O.P. Rhum Vieux Agricole 1 oz. Sirop de Canne 3/4 oz. fresh lime juice 1 oz. chilled Brut...