If there was ever an official Beach Bar Bums troubadour, Harold Boothe may have just been bestowed that title. Never mind his soulful laidback tunes tailor-made for a day on the beach that you can find at his site, lakelizardmusic.com. The real clincher is the song he wrote and performed entitled “Beach Bar Bums” (download the song for free for a limited time). Yes, you read that right. We have our anthem, thanks to Mr. Boothe, and it comes complete with the sounds of ice in a glass and a can of beer being cracked open. I mean, seriously. It doesn’t get much better than that.

I first met Harold on Facebook and when I found out he was a songwriter, I checked out his music. His tune, “One Drink Away,” became an instant favorite of mine and I knew I had to find out more. Harold was kind enough to agree to an interview with me and in what was a bonus, surprised me with his “Beach Bar Bums” tune a few days later. I don’t exactly know how to put into words what that meant. This beach bar bums community has taken a lot of hard work over many years to build and it’s something I’m quite proud of. When Harold was able to put my passion into a song that truly reflected what our community is, I was honored, beyond grateful and just simply floored. 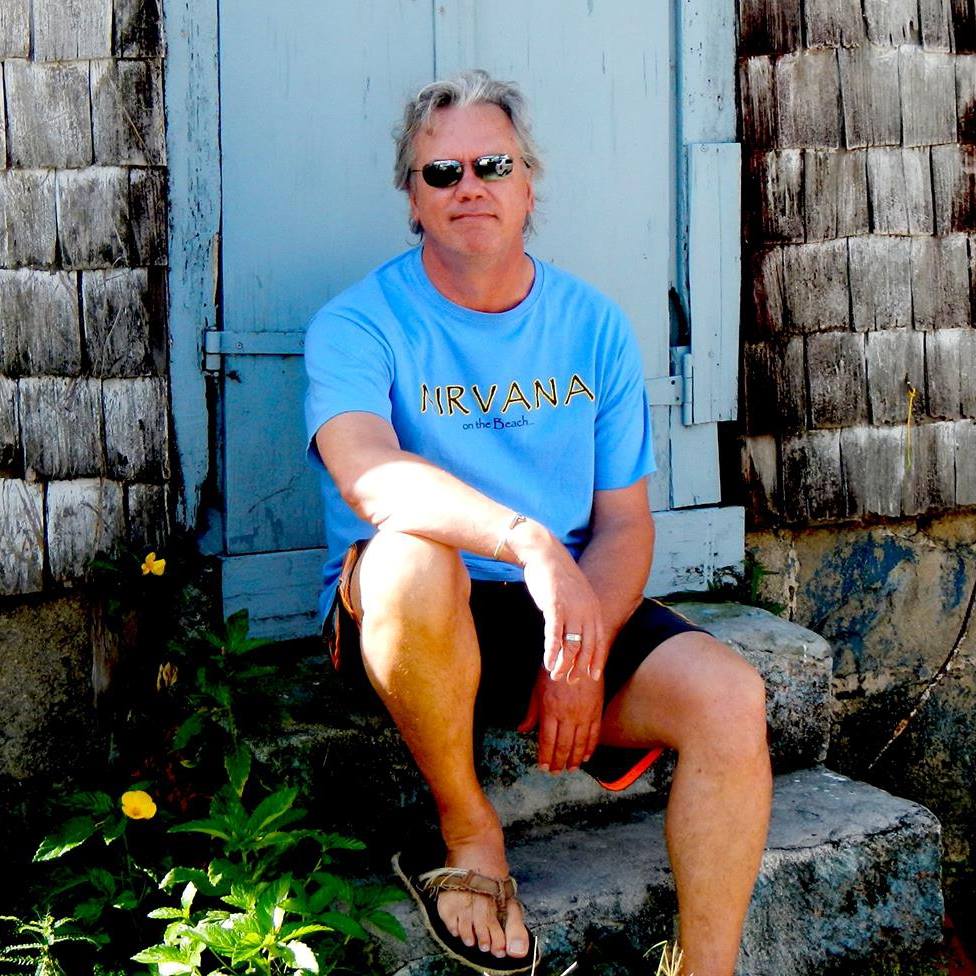 Harold Boothe In His Own Words
I grew up in the deep south — Opp, Alabama to be exact. Opp is about 20 miles from the Florida line and about 70 miles north of Fort Walton Beach, Fl and the Gulf of Mexico. We had relatives that lived in Fort Walton Beach and would visit occasionally, long enough to get blistered good and head home. But mostly, the beach could have been a thousand miles away from my town. My mama’s family worked and lived on their farm, but my grandaddy, grandmama, mama and my brother all played music. These were my early influences and I started writing poems and songs around the age of 10.

After college, I moved to Mobile, Al and from there discovered the Alabama coast from Dauphin Island to Perdido Key. Ah, the beach bars…from Pink Pony Pub to the Flora-Bama. Doing research for new songs! This was the best time for the Alabama coast to me…still mom and pop bars and hotels before the commercial takeover and condo-mania of today.

My job took me to Nashville and as time allowed, I enjoyed being close to the music everywhere. I spent some time trying to pursue my writing and playing writers nights, but having a real job and raising a daughter took priority. I still wrote and played music whenever possible, up and down the lake that I still live on outside of Nashville…on boats, on riverbanks, backyards, always music. 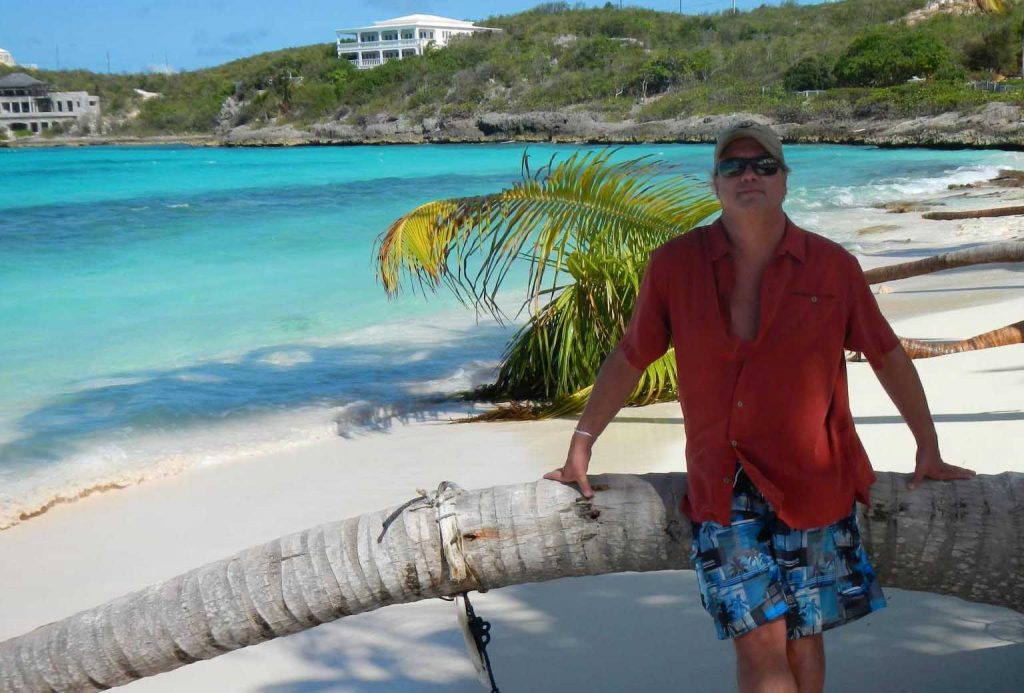 About 20 years ago, a friend of mine said he was going to Grand Cayman with some old friends of his, and there was room for me if I wanted to go. They talked me into it and I have never looked back! I fell in love with the Caribbean and have been to 20 or so islands since, and some multiple times. If there was no one to travel with, I would go alone. I never thought I’d have the chance to visit these places. My last Caribbean trip was to Jamaica in December before the pandemic.

We have made annual trips to Key West for years and worked in an extra trip this year. On our last trip in October, we were introduced to the trop-rock nation, made some great new friends and heard some great music. These are the musicians that you actually hear and see in the beach bars everywhere. I’m pretty sure the beach bar bums following would love this crowd and probably know some of them. Google will find them for you…tell ‘em I sent you!

These days I am proud to be a full time beach bar bum and songwriter, making history and writing songs. 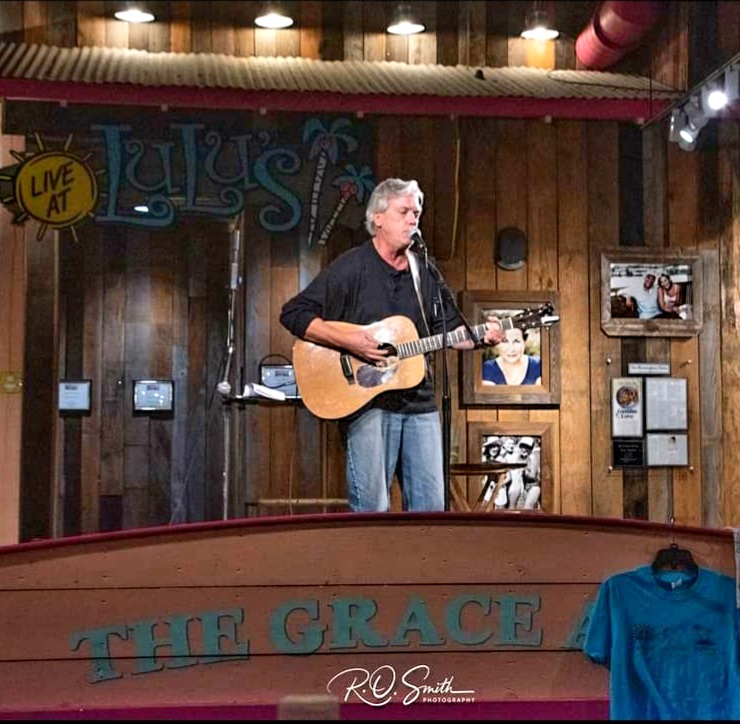 First of all, thank you for agreeing to sit down with me for a “virtual interview.” Tell us how you became involved with/discovered the beach bar bums community.

Not sure when I became involved with the Facebook beach bar bums community, but I remember stumbling across it on FB and thinking ‘these are my people.‘ It’s fun to see others post pics and stories and think, ‘hey, I’ve been there!‘ And to be able to swap info about these places. A beach bar state of mind is what we all need right now.

If someone asked you to describe your music, what would you tell them?

My music collection and what I listen to, is very eclectic – the album on my turntable right now is Charlie Rich, before that one George Gershwin, Jimi Hendrix, Ray Wylie Hubbard, Vern Gosdin, Billy Joel, etc. Take all of that, put it in a blender, and you get my music. Trying to paint a story with words. I hope when you hear one of my songs, it will stir an emotion in you and make you think ‘I know exactly what he’s talking about.’

Most of your songs seem to have a sense of yearning to them with maybe a sprinkling of melancholy tossed in every now and then. Would that be an accurate interpretation? If so, where does that influence come from?

Yearning and melancholy…would have never crossed my mind, but after talking to some friends, they say you nailed it. A lot of my influence comes from growing up in a small town in the south, leaving that town and finding my way through life. And the relationships, adventures and struggles along the way. Looking back on all of that now, there’s different perspective and even more song material. Most of my songs start with at least a piece of reality from my life. My motto or slogan is : lakelizardmusic – making history & writing songs.

For me personally, your songs are tailored for long open road cruises at night with the top down underneath the stars or for taking in a sunset on a warm beach with a cold drink. When you write your songs, do you ever imagine what kind of setting people would be listening to them?

In my mind the people listening to my songs are riding the backroads or floating on a boat on a warm summer day. Or maybe on their own back porch or back yard in a beach bar state of mind with a cold beverage in hand. Although it would be nice to hear them played in a huge stadium or coliseum!

I could put “one drink away” on repeat and be perfectly content. Tell us about the inspiration for that story.

That’s the ultimate compliment for ‘One Drink Away!’ It’s definitely one song that seems to catch everyone’s ear. The inspiration was someone trying to deal with a relationship and not knowing whether to keep on or walk away, do you call them or forget them, just a lot of indecision. Sometimes one drink can give you a little direction…not necessarily the right direction, but it’s something. You’re always one drink away from somewhere else!
(Little known fact pointed out to me was that if you take a drink every time I sing ‘one drink away’ you can have 13 drinks during this song.)

It’s hard to pick a favorite song I’ve written, they’re kinda like kids. One of my favorites is a song titled, ‘I Just Love You.’ It’s a sappy title, but a good song. I started writing this song on the ferry from Anguilla to St Martin as my girlfriend was telling me a story about someone who got a tattoo of their name, but it was spelled wrong. When I had finished the song later, she said that’s a good song, it talks about tattoos, sawmills, floods, Nashville and cigarettes. A year or so later, my daughter told me that it would be a good wedding song, if you could leave out the parts about tattoos, sawmills, floods, Nashville and cigarettes. So I started working on it and turned out a new ‘ I Just Love You’ (LKB) version. I sang her version at her wedding for their first dance.

Favorite song by somebody else?
Impossible for me to do. I love so many songs by Jackson Browne and Dan Fogelberg to start with, Charlie Robison, Hank Williams and on and on. I’ve been lucky over the years to hear songs by writers that were great songs, but they never got heard beyond the room. There’s an old album from 1972 by a guy named Bob Frank that is just a killer songwriters album. It’s like when somebody asks what is your favorite island. It depends on what you’re looking or listening for, you’re frame of mind and so many things.

I love the concept of beach bar bums and the interaction with everybody. My website is lakelizardmusic.com where anybody can listen to some of my songs and give me feedback and inspiration to write more. All vocals and instruments and songs on there are me, some finished out in my little studio, and some just vocal and guitar. I’ve got a couple of folks recently interested in recording some of my songs and that’s exciting. I have a new song called “Boots on the Beach.” 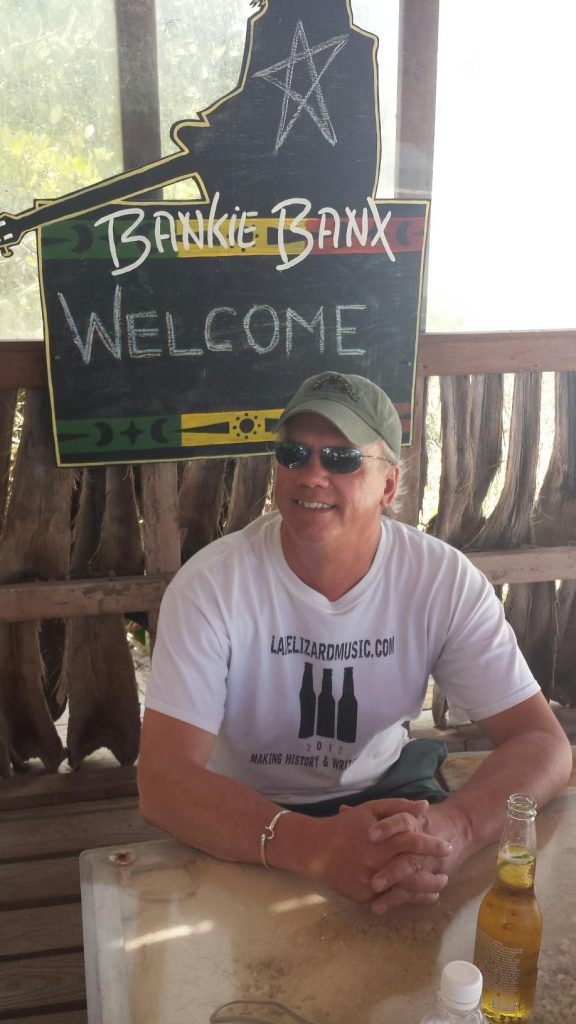