The thing about Jim Greer is that the manner in which he conveys his travel experiences, among them this most recent story about a beach bar breakfast in Curacao, is so poetic that they seem magical. Really, though, how many of us, when we first encounter an island or destination, have chosen to strike out on our own in search of somewhere special? Some of my most memorable experiences at beach bars have been the ones I found on my own. Jim just has a better way of bringing those moments to life.

Clearly, none of us knew specifically where we were going. But, there is always that guy. You know, that guy. He knows where he is, where he’s going and what he’s about. Yeah, him. He was right behind us.

“We go through the castle, then over the (expletive) bridge.” 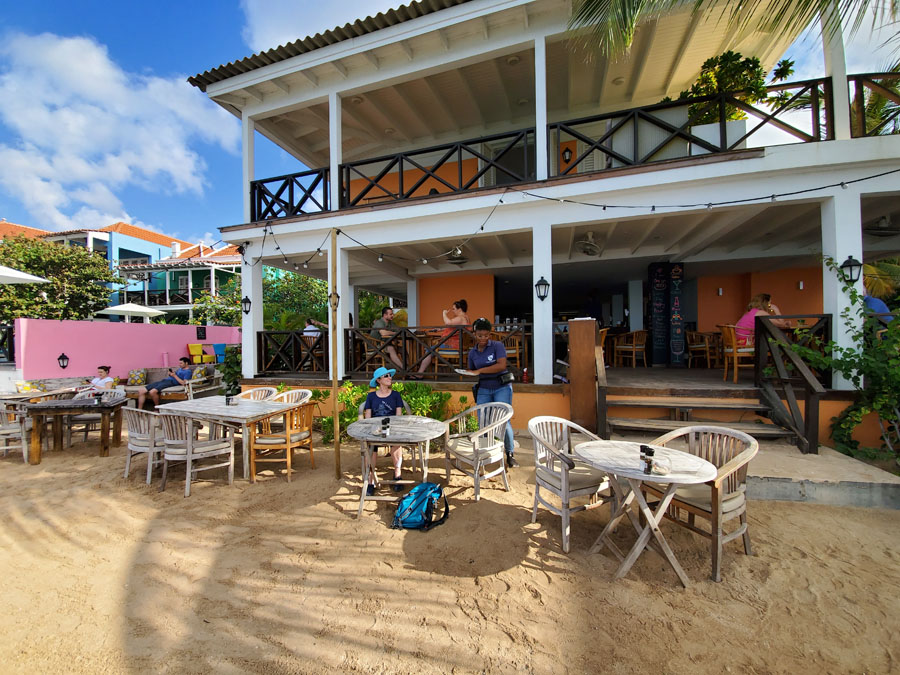 Curaçao was first visited by Europeans in 1499. Primarily a Dutch colony, many languages are spoken there, including Dutch. So… Maybe it’s actually called “Fookin Bridge,” Dutch for articulate pontoon…or something. In fact, as is maddeningly common with “That Guy,” he knew what he was talking about, except the crossing is called the Koningin Emmabrug, or Queen Emma Bridge. The locals apparently call it “Our Swinging Old Lady.” It’s linked, so that when boats enter the harbor one end detaches and it swings like a garden gate, apparently by means of a giant outboard motor contraption. It creaked and groaned as we traversed into downtown.

The businesses were shuttered (it was barely 8AM), the narrow streets deserted. But, the architecture was amazing. Most everyone associates Curacao with a narrow set of buildings in pastel reds, blues and greens, lining the estuary in all its UN World Heritage grandeur. That’s only a small example of what the city center is about.

Most of the buildings are remarkably similar, and entirely individual. At one point – maybe it’s still true – property taxes were paid according to a building’s linear frontage measurement. Everything is built narrow, tall and deep, of some kind of stucco-covered wood or brick. Then, they are painted a vivid color.

We got cell service – why wouldn’t we – so we struck off alone, following the map function on our phone (powered by a company whose name rhymes with moogle) to the beach. Well, to the water. 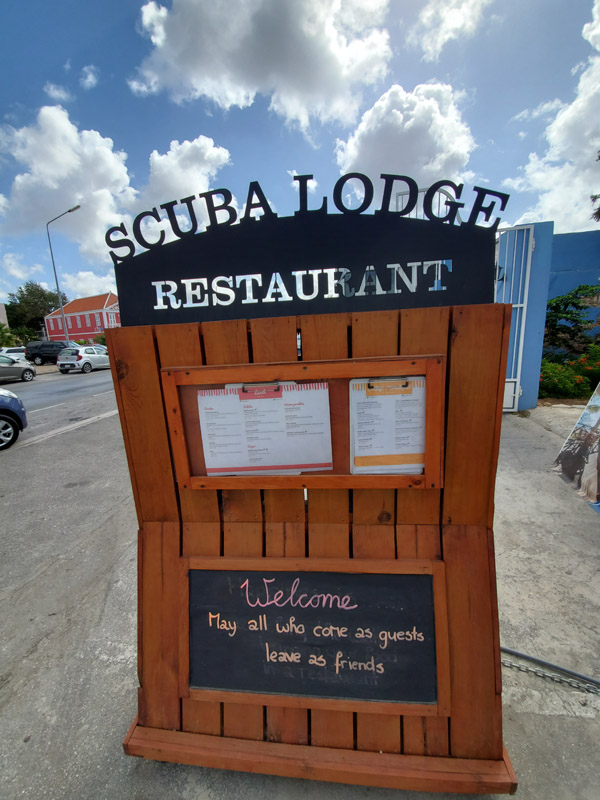 The rocky shoreline, perhaps fifty feet wide, extended from the roadway maybe twenty feet and ending at a jumbled breakwater. One solitary ten-by-ten structure sat perched perilously close to the crashing waves, abandoned save for an old office chair. At one time it might have been an informal beach bar – a cooler full of Caribs, maybe some shrimp on the barbie. Perhaps, on a beautiful afternoon, it still served.

We are nothing if not flexible, and resilient. Walking back toward town, the boat, and the buffet, and somewhat lost we stumbled across the Scuba Lodge Restaurant. Did I hear someone calling our names?

We selected a table by the stone seawall, an unobstructed view of the Caribbean before us. The server brough us menus written in Dutch and English and began what appeared for all the world to be a perfunctory “Where are you from, is it snowing there” server patter. My wife mentioned it was her birthday – acknowledged with a tiny smile – and she took our order. Okay. The view was breathtaking, the warm morning sun conspiring with a modest but steady breeze to generate a perfect temperature for gazing. Occasional waves broke against the wall and cooled us off. We were exactly where we were meant to be. 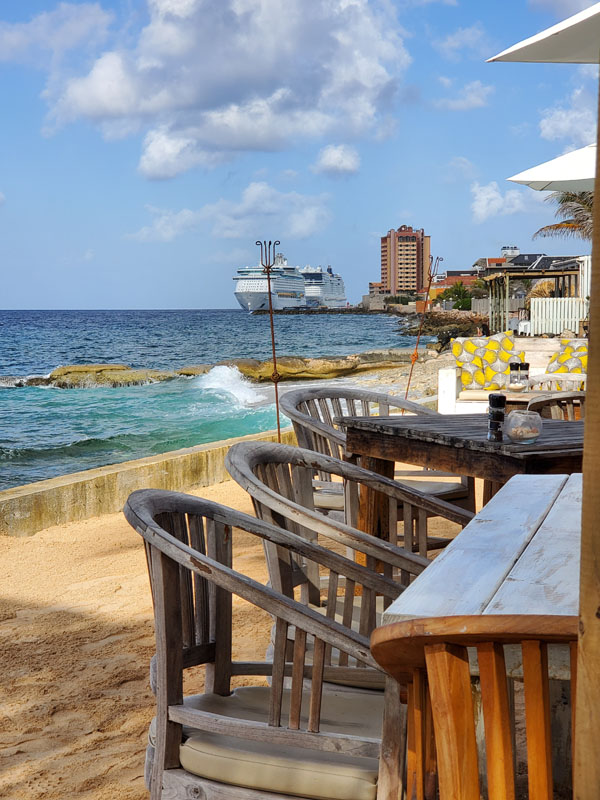 They served their coffee, a very stout espresso, in demitasse cups with tiny spoons to stir in the fair trade raw sugar. Strong, flavorful… If that kind of presentation doesn’t work for you, even occasionally, maybe you really don’t like coffee.

I ordered scrambled eggs and bacon, she pumpkin pancakes. Hers were more like crepes, light and flavorful. Made of locally-sourced produce, the ingredients stood up to what little syrup they needed. Mine – I’m being conservative here. I’m guessing six eggs, easily. It came with a deep brown bread that was at once soft and substantial. I’m thinking this was intended for divers with a couple tank excursion ahead of them, something to keep them stoked until the boat returned to port and the drinking lamp was lit. Except –

There was an actual Scuba breakfast, a box of food…not a board, a box…with cheeses, meats and assorted sides. It would take me a week to eat it.

We’d barely begun to enjoy our bounty when a second employee arrived at our table. Birthday mimosas, compliments of the house. “Happy birthday,” the woman said, granting us a beautiful smile. Not only was this a wonderful gesture, there was also some orange juice in our fabulous champagne. 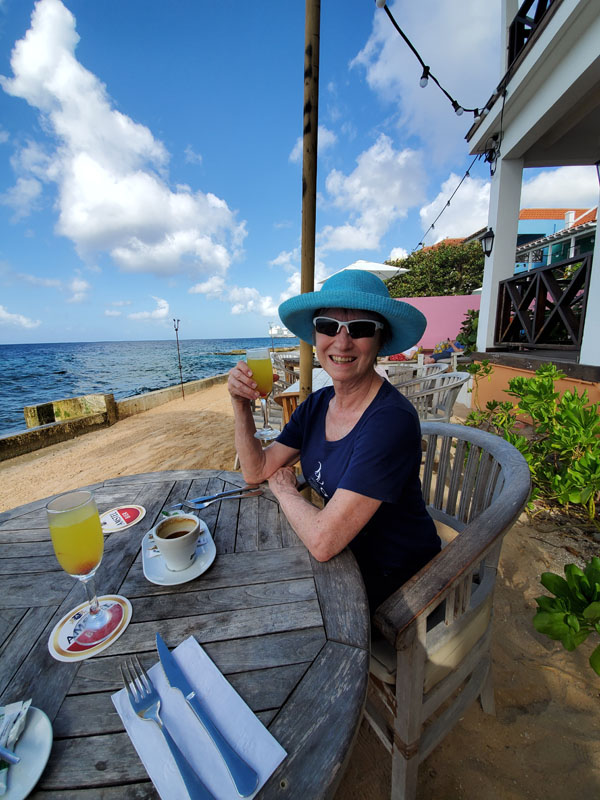 Our original server, who grew up in the Netherlands and had come to Curaçao eight years ago, was simply a delight. She chatted about how she’d like to see more of the world, what it was like to live on the island and listened intently to our stories. My wife travels internationally presenting at seminars and conferences, which our server found captivating. The woman wanted to know where my wife had been, the things she’s seen and done. Her kindness made a birthday girl feel welcomed, and special.

It was a delightful morning, exactly what we sought without really having a plan. The check… Less than a couple drinks at our favorite Mexican restaurant at home.

Honestly, we might still be there, except that the boat would have left without us. Which, given the hospitality we’d found at this little diver’s paradise, would have been fortune indeed.

Find out more about Curacao and its beach bars.