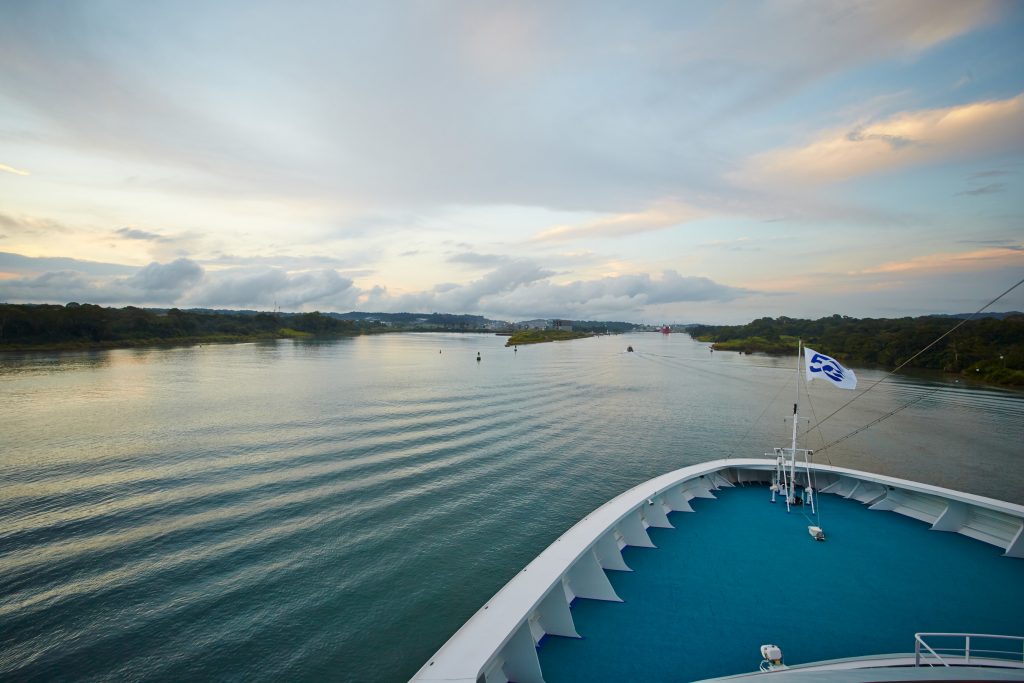 Still, ship masters repeatedly visit ports of call, becoming familiar with not only the local waters but also with spectacular sights that can be seen from the ship as well as the culture and lifestyles they and their passengers experience on land.

With that in mind, here are 10 Captains’ Favorite cruise destinations.

“If I close my eyes, I can still remember the extraordinary sunsets of French Polynesia. Visiting these islands is a unique experience. The lure is not only the friendly Polynesian people but also the atmosphere, from the warmth of the air scented with tropical flowers to the romantic sunsets that indicate the end of another extraordinary day in these marvelous islands.”

“The way from the sea into Sydney Harbour is second to none – the white surf breaking onto the rocky Heads that mark the entrance, a natural welcome to the beautiful waters. When making the final approach to the Overseas Passenger Terminal, the beautiful Sydney Opera House on the Port Side and the majestic Harbour Bridge on the Starboard Side, it is just the perfect place. You dock in the middle of these two iconic monuments of such an amazing city.”

Captain’s tip: “It’s an easy 15-minute walk east of the terminal to the quiet glory of the Royal Botanic Gardens.”

“When I first went to sea, I sailed for one of those old and famous shipping lines on a regular run to Indonesia and other places in the Far East. I find myself now on the Rotterdam, after 30 years, going back to the same places. Much has changed but also a lot has stayed the same. Indonesia is a country which has a special place in my heart.”

Captain’s tip: “An unexplainable adventure there is the sunset. Seeing this huge warmth-generating star touch the horizon and seemingly stay there for a while, then disappear too soon, is a wonder that is unbelievably grand in its simplicity.”

“Cruising in the Caribbean, Fort de France in Martinique is my favorite port, a relaxed and friendly place where you can experience the kindness and culture of the Creole people in a gorgeous and natural setting. The climate, food and the zouk (folk music) are all amazing.”

Captain’s tip: “There are many opportunities for water sports. I’ve personally enjoyed the ship’s excursions for snorkeling, diving, sailing and fishing – all delightful.”

“Requiring a passage of some 800 miles up the Amazon River, reaching Manaus is an adventure in itself. The ship transits mysterious channels, passes islands that move and crosses areas that are actually shown as land on navigational charts, which takes some getting used to if you’ve spent your life avoiding charted land. There are villages where the local population is more interested and entertained by you than you are with them. And then you arrive at this bustling city of 2 million in the middle of the Amazon Rainforest.”

Captain’s tip: “Dressing in formal attire and attending a champagne reception and performance at the historic Opera House in this remote city is an amazing and memorable experience.”

“The Panama Canal resonates with me for the fact it was constructed in the first years of the 20th century, and completed in 1914, yet today’s larger ships can still pass through the famous locks. When we sail through the steep-sided Gaillard Cut section of the canal, one cannot but think with awe of the vast numbers of canal construction workers who lost their lives in the jungle in order to complete this Wonder of the World, connecting two oceans, which forever changed the face of the shipping industry.”

Captain’s tip: “Plan to spend time observing during the 10-hour passage as your ship is raised and lowered. You’ll at times be just inches from the canal’s side, the green jungle beyond.”

“Try to imagine an intimate, authentic Caribbean island, with a small and colorful downtown and a laidback but welcoming atmosphere. Try to envision perfect crystal clear water and white sand beaches just a step away from the ship. This is an island where I de-stress and get in touch with my true soul.”

Captain’s tip: “There adventures including scuba diving (my favorite activity), helicopter and boat rides and swimming with sharks. You can also just relax on the beach by walking away from the pier area and following the coastline in any direction.”

“There’s nothing nicer than traveling up the Elbe in the morning and entering Hamburg Port. In summer months, when the ship is just in front of the curve of the harbor piers (Landungsbrücken), the sun usually rises behind historic Hamburg Michel (church) and the view is just amazing. Although I’m at home all over the world as a seafarer, Hamburg always gives me a feeling of coming home. When our ship leaves Hamburg Port, tourists stand along the Elbe and excitedly wave at us.”

Captain’s tip: “I would recommend taking a small barge through the Speicherstadt (the historic canals of the largest warehouse district in the world).”

“When we arrive here it is an early morning for me, as I have to attend to navigation through Moreton Bay before reaching the Brisbane River. There is not much that beats this transit. It is usually quiet as not many boaters are out at that time of the morning. In the summer as the sun rises, it highlights the skyscrapers of the city, seemingly announcing that you are entering and welcome to a modern and vibrant Brisbane.”

Captain’s tip: “Brisbane is easy to walk around with many areas dedicated to pedestrians and particularly friendly locals. You’ll find a wealth of restaurants and nightlife on the South Bank of the Brisbane River.”

“Arriving in New York with the ship early in the morning will never become routine for me. As we approach our destination, still relatively far out at sea, our ship passes Long Island. It’s still dark when we pass the second highlight, the Verrazano Narrows Bridge, the huge bridge connecting Brooklyn and Staten Island. Then we pass the Statue of Liberty on our way into the harbor. But most beautiful of all is when you pass the Hudson side of New York, with the sun rising behind the city. From the height of the ship you can look down into the individual streets of New York.”

Captain’s tip: “Be up at 5 a.m., standing on the railing with a cup of coffee and watch as the ship approaches Manhattan. It’s something everyone needs to experience for themselves.”

To view the original version from PR Newswire, you can find it at https://prnmedia.prnewswire.com/news-releases/worlds-best-cruise-destinations-300258651.html.