Getting My Stiggins’ Fancy on With a Ginger Infused Pineapple Daiquiri

Knowing people in the spirits business (liquid spirits, not the ghostly kind) can certainly have its benefits and when a couple bottles of the new Pineapple Rum Stiggins’ Fancy from Plantation Rum showed up at my doorstep, it pretty much made my week.  You see, no other bar in our state had it yet there it was sitting in Beach Bar Bums HQ just begging to be used in a daiquiri.

I had originally asked for a bottle of Plantation’s 3 Stars rum so when two bottles of the 3 Stars showed up along with the two bottles of their Pineapple Stiggins’ Fancy (surprise!), I knew my transition from rum to vodka back to rum was going to kick into overdrive with a drove of daiquiris at the wheel leading the charge.

And that has been the case.  While my appreciation for gin continues to grow and vodka tonics will always be a fallback, my familiarity with rum and obsession with simple syrups have led me straight into the city limits of “Daiquiriville,” where the residents start and end their day with a simple drink in a fancy glass and abhor anyone who insists on ordering the frozen version of this classic cocktail.  Quelle horreur!

It took me a while to come up with a version of the daiquiri where I could use the Pineapple Stiggins’ Fancy.  I was tempted to just create a classic daiquiri (and will at some point) but my refusal to imbibe in any daiquiri without Plantation’s 3 Stars simply prohibited me from doing that.  After all, a man’s got to have his standards and for me, 3 Stars is it when it comes to daiquiris.  I finally settled on a ginger infused version of the daiquiri utilizing ginger infused syrup, figuring that the ginger’s spiciness would complement the sweetness from the pineapple rum. And to make sure everything was perfect, I even bought two new fancy glasses to serve them in. That’s dedication to the craft, my friends. 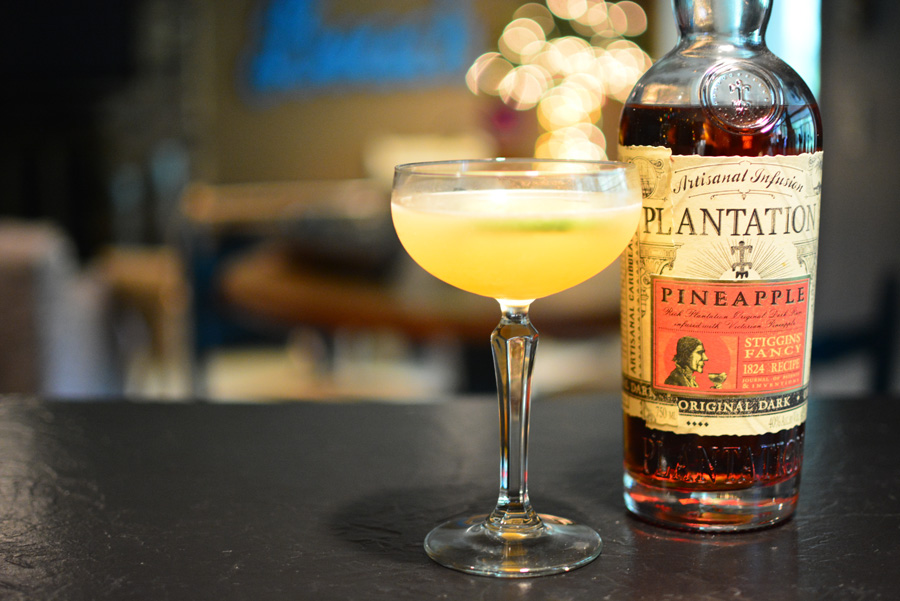 To be completely honest, I was right.  While the cocktail might need a little fine tuning with some bitters or a tweak to the ratios, overall response to it was better than I expected.  I can normally tell if someone doesn’t like my recipes – they’ll either come right out and say it (in that case, it’s pretty obvious) or their response will be more tepid and the fact that their drink is still sitting in front of them two hours later will become a harbinger of the cocktail’s inevitable demise at the bottom of the kitchen sink. 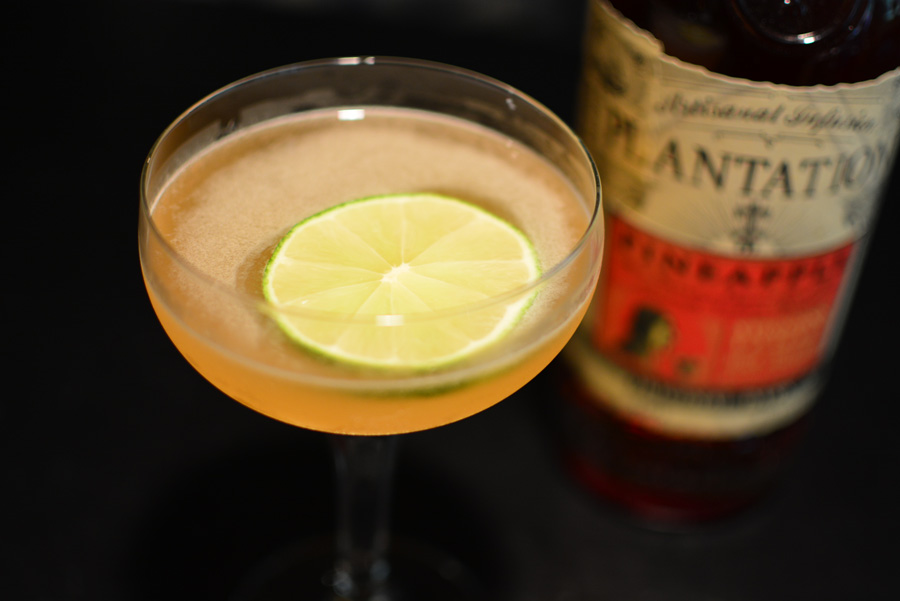 The typical response to my ginger-infused pineapple daiquiri, however, consisted mostly of a surprising “Wow, this is really good” followed by a rapid sucking down of the drink and ordering of another.  They were getting the drinks for free so that might have been part of it but even I can only stomach so many free drinks.  Plus, Plantation makes excellent rum so any less-than-enthusiastic response would have been blamed on the drinker’s palate.

If you’re a fan of daiquiris, give this version a try.  You’ll have to find Plantation’s Pineapple Stiggins’ Fancy rum somewhere in order for the recipe to work but if you’re lucky enough to get your hands on a bottle, let me know what you think.  If you tweak it at all and like or dislike the outcome, tell me about it.  I’m far from a master mixologist so any constructive criticism is always appreciated.  Merci!

Preparation
In a cocktail shaker, combine the rum, syrup and juice and stir until thoroughly mixed. Fill shaker half full of ice and shake until chilled. Strain into a cocktail glass and garnish with the lime wheel.

Instructions on how to make ginger infused simple syrup are contained in the following video. That’s how I learned!