Every once in a while, when news is slow on the beach bar front or I need an image for an article, I’ll head on over to Flickr and browse through their Creative Commons pics. Creative Commons is a license that photographers can use that allows their work to be distributed freely, as long as the required attribution and license requirements are met. In some cases, you can do pretty much whatever you want to the photo, as long as you give credit to the photographer. It’s been indispensable for me. As much as I would love to travel the world and write about beach bars, it’s not a possibility so having this online catalog available has saved me more than a few times from having text-heavy posts. And really, we all know you’re not checking out this blog for my poetic prose, right?

All of that to inform you that I’ll be dedicating Fridays to sharing some of my favorite Flickr beach bar images. Why Friday? I’m a huge fan of alliteration and “Friday Flickr Find” was just way too awesome to pass up. I’ll also include information on the featured beach bar and the photographer if possible.

The first featured image is by Rob Bertholf and is of the view from Tiki’s Grill and Bar on Waikiki Beach in Honolulu. It is a 2014 Trip Advisor Certificate of Excellence award winner, an Open Table 2015 Diners’ Choice winner and a Honolulu Magazine Hale ‘Aina Award winner for 2015. 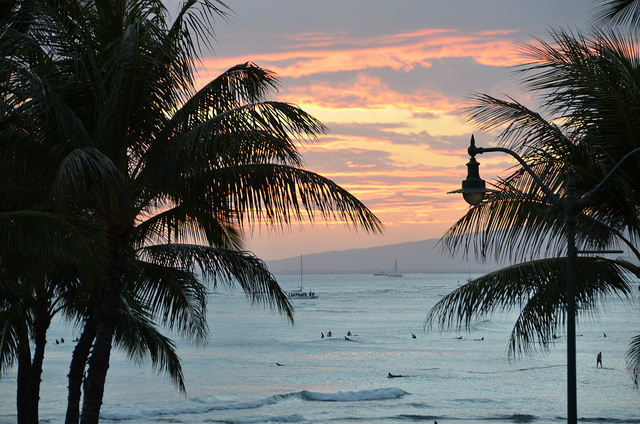 About Tiki’s Grill and Bar
“Aloha, and mahalo for your interest in us. Here’s a little taste of who we are.

Tiki’s is consistently touted as “the place” for local people to take theirs visitors when they come to Oahu. Since opening in 2002, Tiki’s has won numerous awards, including the prestigious Hale Aina Award voted on by the readers of Honolulu Magazine, and the Ilima Award, voted on by readers of the Honolulu Star-Advertiser. In 2012, Tiki’s was honored with the “Best Of Honolulu” award from Honolulu Magazine for having the best kids’ menu!