Anguilla might be tranquility wrapped in blue but With Bankie Banx’s Moonsplash music festival kicking off this Friday for its 25th anniversary show, the island will become wrapped in reggae for the weekend as the musical strains emanating from the Dune Preserve envelop the island. To learn more about the artists performing this weekend, I went searching on YouTube and was able to become more familiar with their music. While watching some of the videos, it occurred to me that I should try and reach out to some of the musicians and see if they would answer a couple questions about their music and Moonsplash. I didn’t expect anyone to actually reply but I had nothing to lose. To my pleasant surprise, I heard back from a few of them and they were more than willing to answer my questions. 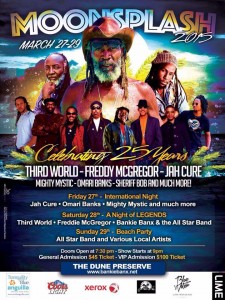 Among the respondents was Cat Coore from Third World, a Jamaican reggae band that has been around for over 40 years and one of the headliners for the weekend. Not only was he kind enough to respond but he recorded his answers and sent them to me. How cool is that! We now get to hear Cat, straight from his own mouth, discuss Moonsplash, Third World’s music and his history with Bankie Banx. I don’t know if this would be considered a “get” for people who do this type of stuff for a living but I think it’s pretty awesome and consider myself fortunate to be able to provide this audio record for fans of Third World, Moonsplash and reggae music in general.

A special thanks also goes out to Omari Banks and the Mighty Mystic who took time out of their hectic schedules to kindly respond to my questions!

For those of you going to Moonsplash, following is a small synopsis of all the bands listed on the promotional poster. For more information on each artist, please visit the relevant links or check them out on YouTube.

On His History With Bankie Banx and Moonsplash

Find out more about Third World’s music on their Last.FM page.

On His Music’s Message
“The message is clear in my music it’s all about one love for all of humanity and justice for the oppressed, I also sing for the ladies so look out for something special for the ladies :-)”

Find more of Omari’s music on his YouTube channel.

On Playing At Moonsplash
“I feel great and honored to be performing on a fest as long running as Moonsplash. 25 years is a great accomplishment for the festival and it shows just how special Moonsplash is.”

On His Music’s Message
“After listening to my music I hope people will say to themselves wow I just discovered a genuine roots reggae artist who prides himself on delivering deep global messages that everyone can relate to on one level or another.”

Listen to more of The Mighty Mystic’s music on his YouTube channel.

Check out more of Freddie McGregor on his YouTube channel.

Listen to more of Jah Cure’s music on his YouTube channel.

And last but not least, Bankie Banx

Find more of Bankie’s music on his YouTube channel.

About Moonsplash
“Moonsplash is the longest running independent music festival in the Caribbean. Founded in 1991 by Bankie Banx and Sheriff Bob Saidenberg as an annual showcase for Bankie Banx to perform on his native Anguilla, Moonsplash expanded to become an opportunity for the region to experience the best reggae and music acts in 1995 when Bankie permanently relocated to Anguilla.

Since then Moonsplash has become known as the world’s greatest (though not the largest) beach party. Moonsplash is also known as the annual celebration of reggae and has featured every major reggae act over its 25 years of existence. Bring your adventurous side as Moonsplash is considered one of the ten craziest parties around the world – think “Burning Man” which also makes the list.”