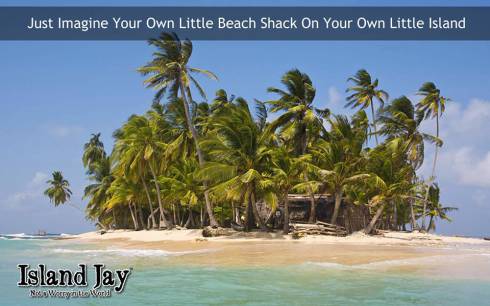 I’ve been a fan of the Island Jay Facebook page since it started. I couldn’t help but notice it – the amount of other people liking the page seemed to double every time I viewed it. In less than six months, the page reached 9000 likes. Impressive numbers for someone whose own page took over a year and a half to reach 2000! I had communicated with Jason Guarino, aka Island Jay, before and quickly found out that loved the islands as much as anyone else. So when I thought about doing my next Beach Bar Bums Focus article, I knew I had to ask Jason to participate and he readily accepted.

How did you come to fall in love with the islands and the beach life in the first place?

“The Caribbean has always been part of my life. Sitting in a classroom in the Bahamas while in middle school was an experience as I learned about the history of the Caribbean Islands. Pirates and privateers were always an interesting topic. I learned to snorkel and love the beach on Grand Bahama Island.”

Jason’s history is tied to Coral Beach Hotel on Grand Bahama Island. According to this article on his website, “By today’s standards Coral Beach Hotel isn’t much more than a pool, bar, and beach. As a kid growing up there in the late 70′s and early 80′s it was more than that. Coral Beach Hotel was home and a way of live. It was not fancy, but it more than did the job.

Because we would spend so much time in the Caribbean, I went to school in the Bahamas. Instead of learning about American history, I was learning about Caribbean history and Pirates like Blackbeard and Bluebeard. When school was over, we went straight to the beach to swim or snorkel.”

The Facebook page has taken off since you launched it. Has the website had the same response?

“The facebook page is pushing 9,000 followers in just under 6 months and the web site receives over 10,000 unique hits/month. Both are growing. Some of my most popular articles have been related to Jimmy Buffett – ‘What is a Parrot Head’ and ‘Jimmy Buffett Facts’ have both been popular.”

Are you involved in any other businesses outside of Island Jay?

“My main business is online sales via ebay & Amazon. I do this myself and consult with other corporations on how to move their excessive inventory. I have written a book and many guides on it. The site is Parttimeselling.com. Here it is on Amazon http://www.amazon.com/Online-Success-Selling-Amazon-ebook/dp/B006N0B8LG

I have also been building web sites since 1998. I am fluent in web construction, SEO, web graphic design, blogging, facebook marketing, and I have some experience with coding.”

As I well know, maintaining all of these sites takes a lot of time. When you have time to get away and relax, what do you like doing (besides going to the beach, of course)?

“Playing poker has has provided a fraction of my income as I have been trained by professional players for 7 years. This would probably be an alternative career for me.

My personal interests include BBQ, boating, and traveling, & snowboarding.”

Thanks to Jason for letting me focus the spotlight on him for this article. For more on Island Jay and why he does what he does, you can read the following articles:

Island Jay – Not a Worry in the World

Island Jay is Growing – Come Along, Join the Fun